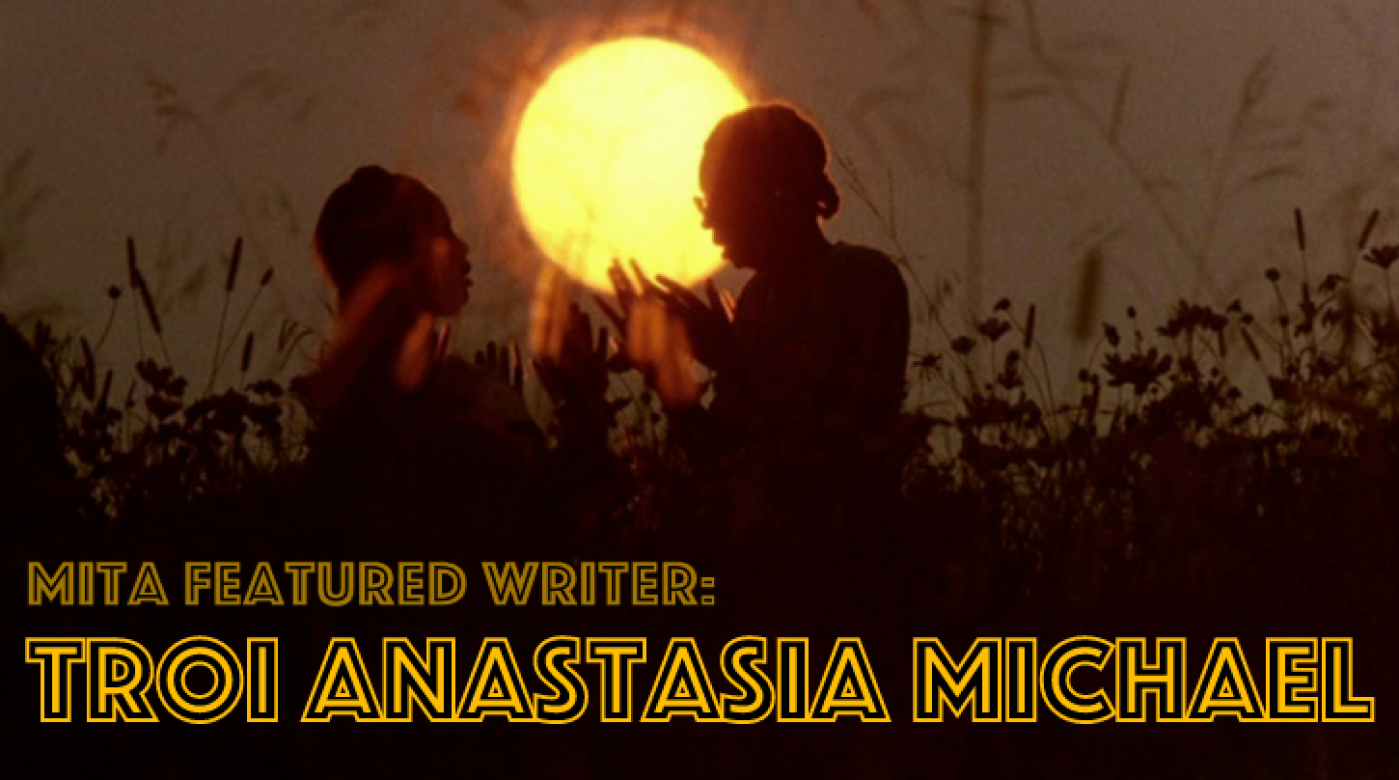 Amazing that this far into our shared history, we still find ourselves quite often and rigidly locked into roles assigned by generations and conditions long-ago removed and irrelevant from our present daily life, in the following piece, Troi Anastasia Michael briefly speaks of their guided by music journey of self-discovery towards “Living Quietly Out Loud,” their own truth in a world reluctant yet ever-so slowly opening to the non-binary notion.

It’s a song that, when first I heard it, begrudgingly recognized its whispering urgently an irrefutable truth into my mental ear canal. A truth I had known – I think? – all along, but never before then had the correct words or experience with which to address it. Of course, based on my strict religious upbringing, it was also a truth that was sure to place me exactly dead center in the fiery pit of Hell, should I ever recognize and/or embrace it.

In the song, the lead singer speaks of longing to “be where the boys are,” but not having societal permission to do so. They sing as well about the fact that, no matter how much they would wish otherwise, they are not seen as one “of the boys” nor, based on mere anatomical assignment alone, as a boy at all.

It is clearly implied however that that is exactly what they see themselves as, in part evidenced by their bemoaning, incredulously questioning chorus of “I’m not a boy.”

The song, like all good ones I suppose, proved a double-edged sword for my fledgling mind to handle. On the one hand, I understood well the feeling being on-the-surface implied by the singer in that they were not viewed as a boy, for I too never really felt I was either.

Or not enough of one, at any rate.

And the sword edge doubled came in the form of the realization that if I substituted the feminine for the masculine in the song’s chorus, title and topic, then I could honestly say that I failed in that department as well. Much as I was never acknowledged as a boy, I was definitely not recognized as a girl either. Even if I found myself strongly pulled towards this inclination while almost daily being derisively treated very much like one caught living in our patriarchal “John Wayne” society.

Thoughtful, artistic, emotional, loyal and spiritual, I seemed to have most-to all the trappings that we normally associate with the female of the species. On top of that, my “masculine” attributes were almost ancillary to the person I was. My hatred of sports rivaled only my lack of talent in them. I also had little use for the archetypal male “bravado” that seems to be nurtured violently and rewarded vehemently in our alpha dog take-all culture.

In fact, so shy and introverted was I that if you chanced to sniff the air in order to locate the boundaries of my personal territorial piss, you would discover that it went no farther than my own grammar school gym shorts.

In total denial, and after spending years trying to artificially bolster my “manhood,” to the point of joining the Marine Corps, becoming an occasional alcoholic, taking up smoking, attempting to kill myself even more abruptly than that, and ultimately marrying a person who was *exactly* wrong, based on their pushy desire for me to be something that I never was, not to mention my pushover penchant to meekly mollify them in those regards, I finally realized that I was fighting against a tide that God – despite what Their followers might have brow-beaten me with for years previously – had never intended  me to.

The fourth time the now infamous “exhole” demanded a divorce, I finally faced what I felt was my ultimate “manly” failure, and gave in. Which in turn saw my life cave-in. Which then finally found me looking – really looking – possibly for the first time ever, deep within.

The realizations were startling.

The surfaced memories of being a young child sneaking into my mother’s room to try on her things alone was a watershed moment, but there were many others as well. For the first time in my entire life, I not only refused to “man up,” but in addition to recognizing what masculine attributes of mine were of worth and worthy, I actively embraced my feminine side as well. I exercised the gifts and qualities innate to me that I had ignored for almost all of my life prior, and I did so in full transparency.

And I began to blossom as a result.

My life is currently unlike anything I would have ever imagined, now engaging in what I like to call, “Living Quietly Out Loud,” the effect of which finds myself surrounded by more love, friendship and support than ever before. I am also much more self-realized and confident as well.

It is a mission I have started to slowly evangelize, spreading to young people and their families the LQOL idea of living unashamedly the you who you are, unapologetically while doing so, and empathetically towards those around you who are also trying to do the same.

Do I myself still suffer occasionally at the hands of other’s arrogant ignorance, bigotry, Trans and homophobic reactions, as well as their “religious” damnation and exclusion? Certainly. But through the effort of discovering who I am by coming to grips with that which I always was, I am no longer imprisoned by them, nor the binary itself. And that leaves me free to be the exact person God always intended.

A note on the current state of our Nation’s mental health, from a Trans/Genderqueer “under the rug” perspective:

I’d the honor of being asked by Spectrum Transgender Group of WNY to keynote speak at this year’s Transgender Day of Remembrance. A somber event, both mourning and celebrating the lives of those Transgender sisters, brothers and others, murdered throughout the year for simply being true to who they are. Yes, in 2017 – in the midst of our “enlightened era” – we still live in a country where children are taught, and adults are allowed, to straight out kill someone whom they don’t understand, fear, and/or “look down upon“ (ie: hate) in their own ignorance.

This is an issue that expands well beyond counseling centers, and needs to be aggressively addressed in both schools, public places and especially in the home. Sadly, it is the last of these that is making it so difficult to change the tide in the other two. A lot of work needs be done to help our youth not only understand that everyone IS different, but it is exactly because of these differences that we are all more beautiful as a result. For, as I stated when concluding my address, “26 siblings died.  We endure their loss. We exult their lives. We evoke their names. We carry forward along with ours, their hope of living in a nation that will someday – please, someday soon – finally catch up to us. 26 siblings died. But that does not mean we have to as well.”

Troi Anastasia Michael – they, them, their, (or honey) are preferred pronouns – is a genderqueer activist, published writer, member of Spectrum Transgender Group of WNY, some-time Trans rights public speaker, streetlight educator, part-time counselor, and former U.S. Marine. Also a long-time and firm believer in fairy tales, they learned not too long ago that instead of simply buying into those of others, it’s far better instead to craft one all your own.

Madwomen in the Attic (MITA) considers itself part of the Network Against Coercive Psychiatry and the revolutionary Mad Pride Movement to end the use of forced "psychiatric treatment" as a means of medicalized social control. MITA is part of a larger effort, started by Thomas Szasz, to stop the totalitarian use of psychiatry to control people, especially women. Our mission is to organize in order to fight against the violations of human rights that George Orwell warned of in his novel "1984"-- the kinds of violations that occur when mental health professionals serve as "Big Brother" in extreme and absurd efforts to maintain social normativity by enforcing social conformity and criminalizing difference.